1 And Saul was there, giving approval to his death. On that day a great persecution broke out against the church at Jerusalem, and all except the apostles were scattered throughout Judea and Samaria.

2 Godly men buried Stephen and mourned deeply for him.

Acts 1:8 said this would happen (this was the commission given to them)

“but you will receive power when the Holy Spirit has come upon you; and you shall be My witnesses both in Jerusalem, and in all Judea and Samaria, and even to the remotest part of the earth.”

3 But Saul began ravaging the church, entering house after house, and dragging off men and women, he would put them in prison.

4 Therefore, those who had been scattered went about preaching the word.

what do you think about scripture saying that persecution caused them to preach the Word ?

the persecution did not stop them, it encouraged them to stay the course and hold true to Christ.

Can a person know Jesus and not want to tell others about Him?

estimates indicated approx 800,000 to 1 million protestant christians in china in 1949 when the wall went up and persecution began against the church there.

when the wall came down  20 years later, and people were afraid that the church had been extinquished , there was a new count of christians numbering up to 31 million.

5 Philip went down to the city of Samaria and began proclaiming Christ to them.

first step of reaching those outside judaism.

10century bc, split occurs among the tribes of israel.  Judah and benjamin go south to start their own place.

After the death of Solomon in about 931 BCE, most the Israelite tribes (ten Northern tribes) except for Judah and Benjamin refused to accept Rehoboam, the son and successor of Solomon, as their king.

Assyrian kingdom later conquers northern kingdom, settles their capital (Samaria)  700 bc) with their own people who later inter married with the Jews

around 500 bc, Nehemiah rebuilding walls and temple, the Samaritans offer to help but are told

“no, this work is for the CONVENANT people”

the animosity grew and around 300 bc, the samaritans built their own temple

did God prophecy a dispersion (knowing about the persecution) ?

did cause cause the persecution (knowing it was cause them to disperse) ?

6 The crowds with one accord were giving attention to what was said by Philip, as they heard and saw the signs which he was performing.

7 For in the case of many who had unclean spirits, they were coming out of them shouting with a loud voice; and many who had been paralyzed and lame were healed.

8 So there was much rejoicing in that city.

same “calling card” we saw with Peter and John earlier in Acts.

9 Now there was a man named Simon, who formerly was practicing magic in the city and astonishing the people of Samaria, claiming to be someone great;

10 and they all, from smallest to greatest, were giving attention to him, saying, “This man is what is called the Great Power of God.”

11 And they were giving him attention because he had for a long time astonished them with his magic arts.

Simon’s reputation was so great, that historians have written that there was statue of him in Rome

Simon the Sorcerer, or Simon the Magician (Latin: Simon Magus, Greek Σίμων ὁ μάγος), is a religious figure whose confrontation with Peter is recorded in Acts 8:9–24. The act of simony, or paying for position and influence in the church, is named after Simon.

According to Acts, Simon was a Samaritan magus or religious figure of the 1st century AD and a convert to Christianity, baptised by Philip the Evangelist. Simon later clashed with Peter. Surviving traditions about Simon appear in orthodox texts, such as those of Irenaeus, Justin Martyr, Hippolytus, and Epiphanius, where he is often described as the founder of Gnosticism, which has been accepted by some modern scholars, while others reject that he was a Gnostic, just designated as one by the Church Fathers. from wikipedia

12 But when they believed Philip preaching the good news about the kingdom of God and the name of Jesus Christ, they were being baptized, men and women alike.

13 Even Simon himself believed; and after being baptized, he continued on with Philip, and as he observed signs and great miracles taking place, he was constantly amazed.

14 Now when the apostles in Jerusalem heard that Samaria had received the word of God, they sent them Peter and John,

go check this out, our spiritual inspectors

15 who came down and prayed for them that they might receive the Holy Spirit.

16 For He had not yet fallen upon any of them; they had simply been baptized 1in the name of the Lord Jesus.

17 Then they began laying their hands on them, and they were receiving the Holy Spirit.

this is different then what happens today (back when this first started, it’s as if God is waiting to indwell them until Apostles arrive to witness this work of God

to see that it is happening to samaritans just like it happened to the Apostles in the upper room.

18 Now when Simon saw that the Spirit was bestowed through the laying on of the apostles’ hands, he offered them money,

19 saying, “Give this authority to me as well, so that everyone on whom I lay my hands may receive the Holy Spirit.”

he wanted to purchase a free gift

20 But Peter said to him, “May your silver perish with you, because you thought you could obtain the gift of God with money!

21 “You have no part or portion in this matter, for your heart is not right before God.

22 “Therefore repent of this wickedness of yours, and pray the Lord that, if possible, the intention of your heart may be forgiven you.

23 “For I see that you are in the gall of bitterness and in the bondage of iniquity.”

Billy Sunday was once accused of stroking the fur the wrong way. He replied “No I’m not. The cat just needs to turn the other way”

(if people are being offended by simple truth, it means they are facing the wrong way to begin with)

24 But Simon answered and said, “aPray to the Lord for me yourselves, so that nothing of what you have said may come upon me.”

in verse 13 “Simon believed”  now … he is being spoken to as if he is not even saved yet (“you have no part in this”,”needing to be forgiven” “bondage of iniquity”)

let’s take a closer look as this word “believe”

For this reason the verb “believe” (pisteuo) is used in the NT to cover a wide range of responses to God and to Christ (e.g., John 2:23; James 2:19). Neither baptism nor the laying on of hands conveys any status or power of itself, though Simon with his shallow spiritual perception thought they could.

are all who believe saved ?

(even 1 John 2:19 tells us some eventually leave who were with us because they were never of us)

There are different types of believe

Intellectual acceptance of those facts

25 So, when they had solemnly testified and spoken the word of the Lord, they started back to Jerusalem, and were cpreaching the gospel to many villages of the dSamaritans.

26 But an angel of the Lord spoke to Philip saying, “Get up and go south to the road that descends from Jerusalem to Gaza.” (1This is a desert road.)

27 So he got up and went; and there was an Ethiopian eunuch, a court official of Candace, queen of the Ethiopians, who was in charge of all her treasure; and he had come to Jerusalem to worship,

28 and he was returning and sitting in his chariot, and was reading the prophet Isaiah.

29 Then the Spirit said to Philip, “Go up and join this chariot.”

30 Philip ran up and heard him reading Isaiah the prophet, and said, “Do you understand what you are reading?”

note that Philip does not hesitate, argue (I’m only a table servant, not an evangelist) but goes a step further and establishes a common point of contact by asking him about something he is already doing (reading). He does not interrupt with his own agenda.

31 And he said, “Well, how could I, unless someone guides me?” And he invited Philip to come up and sit with him.

32  Now the passage of Scripture which he was reading was this:

“HE WAS LED AS A SHEEP TO SLAUGHTER; AND AS A LAMB BEFORE ITS SHEARER IS SILENT, SO HE DOES NOT OPEN HIS MOUTH

33  “IN HUMILIATION HIS JUDGMENT WAS TAKEN AWAY;

WHO WILL RELATE HIS GENERATION?

34 The eunuch answered Philip and said, “Please tell me, of whom does the prophet say this? Of himself or of someone else?”

35 Then Philip opened his mouth, and beginning from this Scripture he preached Jesus to him. 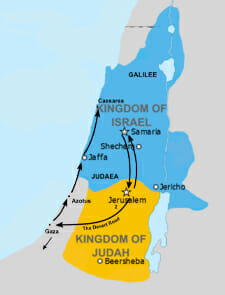 36 As they went along the road they came to some water; and the eunuch said, “Look! Water! What prevents me from being baptized?”

The water being referred to is likely the shore of the Mediterranean Ocean at Gaza (bottom left of map) since there are no other bodies of water along the road from Jerusalem to Gaza.

37 [And Philip said, “If you believe with all your heart, you may.” And he answered and said, “I believe that Jesus Christ is the Son of God.”]

38 And he ordered the chariot to stop; and they both went down into the water, Philip as well as the eunuch, and he baptized him.

39 When they came up out of the water, the Spirit of the Lord snatched Philip away; and the eunuch no longer saw him, but went on his way rejoicing.

40 But Philip found himself at Azotus, (20 miles north). and as he passed through he kept preaching the gospel to all the cities until he came to Caesarea.

Philip (a Greek-speaking Jew) settles in Caesarea (where there are very few Hebraic Jews to persecute his family) and is visited here over twenty years later by Paul in 57AD (see Acts 21:8).

At the outbreak of the Romano-Jewish War in 66AD, Philip and his four daughters escape to Hierapolis where a church celebrating his martyrdom can still be seen today .  Philip the Evangelist.

Philip was not noted to be an evangelist in Acts 7, but since he is noted to be filled with the spirt and wisdom, it is safe to state that he KNOWS God.

and since he knows God, intimately, he MUST tell others about Him.

Luke 16:10 he who is faithful with little will later be trusted with more.

do the small things God’s way, and He may give you bigger things.