Armor of the Lord (Part 3 Shield of Faith)

16 in addition to all, taking up the shield of faith with which you will be able to extinguish all the flaming arrows of the evil one.

The greek word is thureon but let’s bear in mind that Paul is under arrest and escort of Imperial Roman Guard (the Praetorian Guard in Phil 1:13). So while we are reading this from greek, the armor was Roman. The roman shield (scutum) was not the small round gladiator shield (approx. 12-18″ diameter) which made for spectacular combat to observe. This shield looked more like a curved panel from the side of a small airplane. It provided protection from lower legs to the nose when held up and could even be set on level ground to stand itself and provide protection for an archer behind it to shoot at the enemy (since both hands were freed for action) 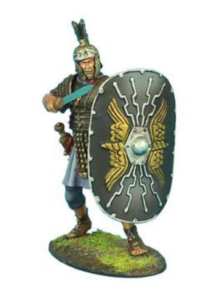 I really appreciate this picture because of the way it depicts the usage of the scutum (roman shield). It shows

Lets take a closer look at the “turtle” 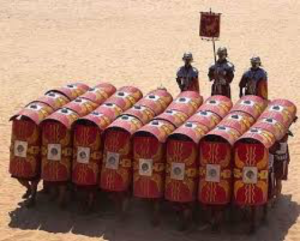 This is my personal favorite application of the shield. The entire unit pulling together, sharing their shields for the good of all, knowing that they all stand together and that as soon as one lowers their shield, it effects and endangers those around him as well.

Lets look back at the verse itself.

in addition to all, taking up the shield of faith with which you will be able to extinguish all the flaming arrows of the evil one.

I think amplifying this verse might give us a more applicable understand of Paul’s metaphor (God’s inspiration) for us to work with here.

OK, let’s wrap this up with a neat little bow and add another “knowledge ribbon” to the decorations on our uniform.

This is written in the bible to provide perspective and awareness of what can and should be done each day as we contend for the faith, the Gospel of Peace to be proclaimed in this enemy territory called earth in an effort to save souls.

We are instructed, in this one little verse, to make a conscious choice to hold firm to our faith to protect us, (and by implication to use it to shield others), to choose to hold it up when inconvenient or seemingly embarrassing (Matt 10:32, Mark 8:38, Luke 9:26 remind us to not be ashamed), and that it empowers us to quench and render harmless the flaming arrows fired by the adversary of God (arrows that he likely designs specifically to hit our weaknesses and vulnerabilities since I find it hard to imagine that the enemy of God, who hates mankind, would not be an astute student of human nature and weakness in character and personality to facilitate tearing us down. 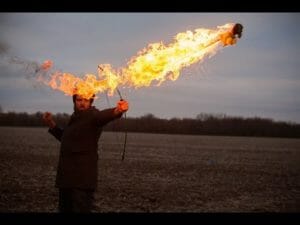 Hold up your shield of faith and do not let it down , ever !  You are charged to contend for the faith 24-7 and if you don’t feel like you are meeting resistance, if you don’t feel the impact of arrows on the outside of your shield that is likely because you already lowered your shield, and took of your armor and the adversary of God, Satan, no longer sees you as a threat. (if you are harmless to him, then he would prefer to leave you alone in your slumber where you are already ineffective for God). Awake oh sleeper !   (Eph 5:14) Rise and let Christ shine. Lift up your shield of faith, hold it up with the emblem of your country (the Cross of Christ) and join the battle !  REJOICE AT THE IMPACT OF ARROWS AGAINST YOUR SHIELD (for you are now in the fight with God and no one shall successfully stand against us when we are more than conquerors Rom 8:31.

Did you feel offended when I suggested that if you don’t feel attacked it meant you weren’t in the fight? I would like to apologize but feel that it is more important to apologize for not apologizing 🙂

This section of chapter 6 in Ephesians read as wartime instructions (this is the assembly manual for your battle gear)  if you don’t hear bullets whizzing past your head or an occasional explosion, preferably hand to hand combat is most effective to winning a should (where you invest in someones life, gain credibility and license to speak into their life) then where exactly are you ? What exactly are you doing ? (that is so important to defend ?)  If your not going to shoot, then make bullets for those who will. There is always a way for everyone to get into the fight, ALWAYS. 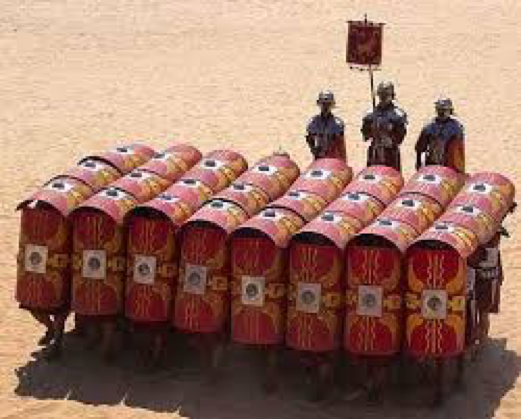 Lets notice a few things about this formation:

Take up your shield, keep up your shield, lock your shield with others and offer your strength to help others (and at times let their strength help you). When you feel the arrows hit, do not be distracted by them, ignore them, since we are to let the shield of faith quench them (not ourselves in our own power).  Getting preachy ?!  yes, I confess that my blood heats up a bit when I see the body of Christ falling back in battles that Jesus, our Lord and Commander, tells us we can claim the victory.

Hold it up, keep it up. (period) (there is no mention of letting it down, right?). AMEN

next week, helmet of salvation … 🙂