Back in January of 2019, only 6 months ago at the time of this writing, I unwittingly embarked on a journey I did not know existed in the possibility of my experiences…  Learning to shoot a concealable carry pistol.

I had paid for and taken the obligatory MA Handgun Safety Course (in terms of preparation, was the equivalent of being shown how to hold one’s breath and being told I was now trained to swim), and had applied, paid, and received my honorary L.T.C. (license to carry) in the commonwealth of MA (which was already my constitutional right but I had to pay out $200 dollars to enjoy said right , LOL) 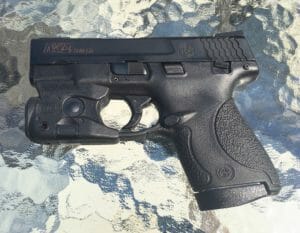 I had researched what I wanted to use, (decided upon an S.M. M&P 9mm shield), what I would be adding to the basic model to make it fully practical as a defense weapon in all basic situations (hence the TLR-6 laser light combo at the trigger mount, the TFO sights, and an Apex trigger swap to reduce the trigger pull down to 5lbs), and was confident I had made an excellent choice of weapons for the intended purpose in mind.
I was ready. (ha ha ha)
All fine and good !  I’ve got the right weapon but now I need to shoot it and become sufficiently proficient for practical self-defense. (was that redundant?)
It turned out to be no easy task … none of the ranges in my area appeared to be accepting new members.  It took two months before I was able to connect with a range that would let me pay to join. done.  In March, I went to range for first time to live fire my pistol. 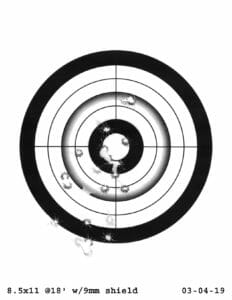 A dismally sad performance !  (oh yeah, I was hitting the paper with each shot, an 8.5×11 sheet at 18 feet away) but nothing I would ever consider bragging about. 21 rounds fired from 3 magazines, in an act of sheer stubbornness to “will” the bullet go where I wanted, resulted in the target you see here. (my grouping (accuracy) is roughly half the entire sheet of paper.

I then noticed an older gentleman shooting in the next cubicle who actually knew what he was doing (I ascertained this conclusion by observing that his holes were all landing in the bulleye as intended … a great indicator!)

I decided to exercise .01 oz’s of humility and peeked over to ask him his theory of what I might be doing wrong (expecting to hear a simple comment like “adjust your trigger finger 1/4 inch more over the trigger and you’ll be perfect”).

He turned out to be a retired NRA instructor (National Rifle Association) and is an expert at teaching pistol shooting technique. After watching me then shoot a few rounds, he told me to STOP and put the pistol down. It turns out that there were things he needed to correct about me, before we could even address shooting !

once he was satisfied that I was holding these together sufficiently (which took the better part of an hour), he then allowed me to pick up my pistol again. (which led to another list of things to be corrected)

Now, another half hour later, we were ready to try a shot !
(assuming that everything listed above had not been compromised)

( I must say, there were two things I was taught that day I had never expected):

Why am I spending so much time talking about range shooting when this post is called “Spiritual Marksmanship”?

because everything I just wrote about has a spiritual metaphor and take away.

A follower of Jesus can’t just read a bible verse and live it out when trials hit, when our mind is flooded with emotions and stress and expect any spiritual accuracy to show itself. (if you think you can, then you are being as naive as I was walking into that range back in March, 2019)

We need to practice foundational issues of our faith (retraining the wiring and reflexes with appropriate responses needed for our new world)
(then these will be solid enough to build upon and handle life when it hits us, and hits hard)

I had to relearn simple things like standing and breathing before I could achieve accuracy (and I had been breathing since I as born and standing soon after that)!!  I had to relearn basic skills appropriate to the world of shooting I wanted to thrive in (cooperating with a mentor of these needed skills).

In God’s kingdom, which we are expected to begin living in down here , by the way, we have to learn how to breath (see armor of God breastplate of righteousness) and stand (see shoes prepared with the Gospel of Peace) in a way that creates a foundation of Spiritual Marksmanship. (2 Cor 10:3-5)

Don’t assume that any, ANY, method of getting something done, that you may have learned on this planet, is how God wants something done. Many of the foundational skills taught on this earth are worthless in the Kingdom of God and are not, NOT, to be used by followers of Christ

2 Cor 10:4 reminds us of the start contrast between human conflict and Spiritual conflict.

Eph 6:12 reminds us that people are not our true enemy, but merely being used by the real enemy, and opposer of God, Satan.

Using human devisions and tactics to achieve God’s purposes is as fruitful as using a flamethrower underwater.
(in our dry world, a flamethrower is a terrifying and destructive weapon, but it the watery realm it is only good for making bubbles)

A mentor of the faith comes in handy here too; someone to lovingly point out both good and bad steps and habits in our thinking and doing.

You were created to make a difference and the first step in that difference actually happening is to decide to contribute.
(if you don’t want to shoot, fine, at least carry bullets for those who do or do triage for those who did). Your decision is the first difference to be made (far too many will refuse to even acknowledge a war is taking place and insist on setting up a beach chair in the middle of the front line in a foxhole and shake their fist at the noise of mortars going off).

I determined that I was going to be effective at the gun range (and in life) with my weapon and that meant complete realization and practice of the skills required for proficiency.

I have also determined that I am going to be effective in this Spiritual battle that I have been recruited into (the bible speaks on this conflict a lot, by the way) and have committed myself to realization and practice of the skills for proficiency in this as well. (I practice the skills of prayer, trust, patience, love, forgiveness (lots of practice needed on this one since I tend to drop my shots below the bullseye when flinching about forgiveness), …

by the way, here is how I am now shooting the same weapon at the same distance (now that I breath, stand, and hold my weapon the way the world of shooting demands). 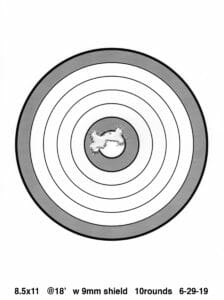 I have now enjoyed the privilege of passing on these foundation truths of shooting to three friends and my wife. (all of whom have thanked me for helping them). And all I could say is “I’m just showing you what he showed me”

If you want spiritual accuracy, you MUST learn to shoot God’s weapons with God’s ammo, and using God’s methods.

Nothing else will succeed because He meant it that way. Only total dependence and trust in Him will open the door for the reward of a faithful life lived for Him.

Learn how to be a Spiritual Marksman and start mentoring others to be as well.

curious about what kind of ammo believers shoot?
check out: