It is commonly said, “there are two crucial events recorded in the bible that must be disproven in order to discredit the Christian faith and render it uncredible.

Acts 9:1 Now Saul, still breathing threats and murder against the disciples of the Lord, went to the high priest,

hard breathing (think of a war horse snorting at the sound o battle, or a bull snorting as it prepares to charge)

2 and asked for letters from him to the synagogues at Damascus, so that if he found any belonging to the Way, both men and women, he might bring them bound to Jerusalem.

what is Saul’s intent ?

over 10,000 jews in Damascus and over 40 synagogues in the 1rst century AD and followers of the Way are already establishing themselves there as well.

(Paul is trying to contain a religious contamination, to prevent it spreading)

3 As he was traveling, it happened that he was approaching Damascus, and suddenly a light from heaven flashed around him; 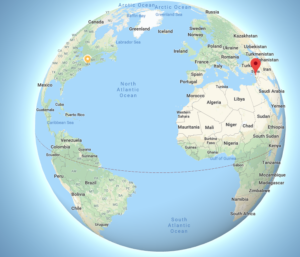 this was not the sun
road to Damascus is Northerly from Jerusalem, which means the sun would have been traveling the same South East to South West path that we see here in New England (close to same distance above equator as we are) 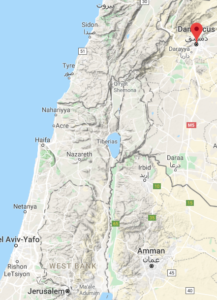 37-38 hrs walking straight if it was flat

actually 60hrs on foot (without stopping for rest or sleep)

Jordan river is average 1000’ below sea level where Saul crossed

nice desert walk straight north until you get to Damascus, Syria.

notice I didn’t mention horse speed ?  (there is no horse in this story!)

(in fact, look at verse 7 “the men who traveled with him STOOD speechless” and verse 8 says they “led him by the hand”)

4 and he fell to the ground and heard a voice saying to him, “Saul, Saul, why are you persecuting Me?”

greek word for voice here is φωνὴν phone (audible sound, which since this sound is translatable, means it is a voice)

why doesn’t the voice say “why are you persecuting believers, or followers of the way ?

Jesus personally identifies with us, people (he sacrificed an awful lot to restore a relationship with each of us)

Note that Jesus includes the phrase “brothers and sisters of mine” in the Matt passage about the least of these.

(could this passage about least of these be talking about followers of Himself specifically ? … since all the other parables just before this one in same chapter are basically comparisons between believers and non-believers?)

6 but get up and enter the city, and it will be told you what you must do.”

7 The men who traveled with him stood speechless, hearing the voice but seeing no one.

even the men with Saul hear the voice of God (though they can’t see Him).  Typical reversal God is doing here.

8 Saul got up from the ground, and though his eyes were open, he could see nothing; and leading him by the hand, they brought him into Damascus.

This happened close to noon time (and close to Damascus) according to Acts 22:6

9 And he was three days without sight, and neither ate nor drank.

10 Now there was a disciple at Damascus named Ananias; and the Lord said to him in a vision, “Ananias.” And he said, “Here I am, Lord.”

11 And the Lord said to him, “Get up and go to the street called Straight, and inquire at the house of Judas for a man from Tarsus named Saul, for he is praying,

12 and he has seen in a vision a man named Ananias come in and lay his hands on him, so that he might regain his sight.”

13 But Ananias answered, “Lord, I have heard from many about this man, how much harm he did to Your saints at Jerusalem;

14 and here he has authority from the chief priests to bind all who call on Your name.”

(now it is human beings who truly believe the Word who become the sanctuaries, the dwelling place for the presence of God Himself)

why does the Spirit of God tell Luke to include this response from Ananias to God in verses 13-14 ? (since there is nothing in the bible that is not intentionally there)

look at the specificness of God’s instructions;

look at the doubt of Ananias

look at the obedience of Ananias

15 But the Lord said to him, “Go, for he is a chosen instrument of Mine, to bear My name before the Gentiles and kings and the sons of Israel;

16 for I will show him how much he must suffer for My name’s sake.”

17 So Ananias departed and entered the house, and after laying his hands on him said, “Brother Saul, the Lord Jesus, who appeared to you on the road by which you were coming, has sent me so that you may regain your sight and be filled with the Holy Spirit.”

what would have happened if he had not gone and prayed over Saul?

What should our response be the next time God tells us to do something ?