18 And immediately there fell from his eyes something like scales, and he regained his sight, and he got up and was baptized;

19 and he took food and was strengthened. Now for several days he was with the disciples who were at Damascus,

20 and immediately he began to proclaim Jesus in the synagogues, saying, “He is the Son of God.”

21 All those hearing him continued to be amazed, and were saying, “Is this not he who in Jerusalem destroyed those who called on this name, and who had come here for the purpose of bringing them bound before the chief priests?”

22 But Saul kept increasing in strength and confounding the Jews who lived at Damascus by proving that this Jesus is the Christ.

23 When many days had elapsed, the Jews plotted together to do away with him,

24 but their plot became known to Saul. They were also watching the gates day and night so that they might put him to death;

25 but his disciples took him by night and let him down through an opening in the wall, lowering him in a large basket.

26 When he came to Jerusalem, he was trying to associate with the disciples; but they were all afraid of him, not believing that he was a disciple.

27 But Barnabas took hold of him and brought him to the apostles and described to them how he had seen the Lord on the road, and that He had talked to him, and how at Damascus he had spoken out boldly in the name of Jesus.

28 And he was with them, moving about freely in Jerusalem, speaking out boldly in the name of the Lord.

29 And he was talking and arguing with the Hellenistic Jews; but they were attempting to put him to death.

30 But when the brethren learned of it, they brought him down to Caesarea and sent him away to Tarsus.

Caesarea was the main port on the Mediterranean ocean (Joppa was second) and was the greatest Roman stronghold in the area. (this is where Philip settled in the last chapter) It is also where Paul will spend two years in Prison later under Roman arrest. 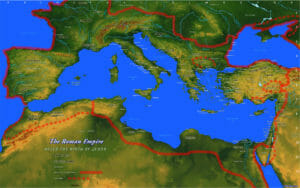 also interesting to note that within the context of the immensity of the Roman Empire, Judea was actually considered a “client state” not officially part of the empire, which meant that Rome allowed local govt to continue  (easier to control volatile populations further away) as long as tribute and taxes could be collected and soldiers could be recruited as needed (click map to enlarge)

31 So the church throughout all Judea and Galilee and Samaria enjoyed peace, being built up; and going on in the fear of the Lord and in the comfort of the Holy Spirit, it continued to increase.

Paul waited over 10 years before he was truly used by God in ministry.

How long did it take him to let it go and wait on God’s plan?

what is the most expensive real estate in the world ?   (human mind)

don’t let anything stay there for free !! (especially those who are damaging the place)

anxiety is the opposite of trust

Pvbs 4:23 Guard your heart above all else, for it determines the course of your life.

Roman 12:2 tells us to be transformed by the renewing of our mind

why are both of these passages talking about trees ?

what is the metaphor ?

(what is a root ?   what does a root do?   we tend to look at the tree or flower growing above the ground and marvel in appreciation of what has grown but often overlook the sustaining life coming from the roots deep underground, unseen by human eyes, hidden away from all light except the view of God who makes them grow. They are the source of all the life growing above and yet, neglect the roots, let them be rotted, chewed by critters, or diseased and the entire organism soon dies and we stand and wonder, “what happened?”

We must tend our roots, the righteousness God desires in us must be tended first and cared for, nurtured before anything resembling God’s word can become visible above ground. (our heart must be filled with Him before He becomes visible to the outside)

by A.W. Tozer, included in his book, The Root of the Righteous where he wrote,

“It is doubtful whether God can bless a man greatly until he has hurt him deeply.”

here is the context of the quote:

“The flaming desire to be rid of every unholy thing and to put on the likeness of Christ at any cost is not often found among us. We expect to enter the everlasting kingdom of our Father and to sit down around the table with sages, saints and martyrs; and through the grace of God, maybe we shall; yes maybe we shall. But for the most of us it could prove at first an embarrassing experience. Our’s might be the silence of the untried soldier in the presence of the battle-hardened heroes who have fought the fight and won the victory and who have scars to prove that they were present when the battle was joined.”

Tozer continues by saying that it is “necessary” for God to use suffering in his holy work of preparing his saints, adding, “It is doubtful whether God can bless a man greatly until he has hurt him deeply.”

Are we going to trust God (and let Him be God in our lives) or continue to trust our self-power instead and continue to get under his feet, doing things according to our opinion and purposes ?

Do we meditate on Him day/night that we may not sin against Him, but , rather, seek His will first?

IF any of us found ourselves in a gym … do we:

then why don’t we treat trials the same way in life?

God is desiring to orchestrate something Christlike in us and the trials are the tool to achieve the change.

Next time we are in a trial, let’s first ask “God, what are you up to and what do you desire for me to grow from in this?”