This message started as a simple napkin illustration I found online which could be used to help someone understand just what John 1:3 means when applied as truth. (it grew into a full blown treatise on the questioned Deity of Jesus Christ) 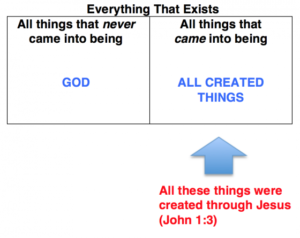 (Could Jesus have created Himself ?)

Now, on the the general idea of “was Jesus Christ really God?”

Jesus’ specific claims about Himself.

His disciples also acknowledged the deity of Christ.

Jesus is also given titles that are unique to YHWH (the formal name of God) in the Old Testament.

Actions that can be accomplished only by God are credited to Jesus. Jesus not only

Christ possesses attributes that only deity can have:

Now, it is one thing to claim to be God or to fool someone into believing it is true, and something else entirely to prove it to be so. Christ offered many miracles as proof of His claim to deity. Just a few of Jesus’ miracles include

There are at least twelve historical facts about Jesus that even non-Christian critical scholars will admit:

Even if someone were to object to this specific list, only a few are needed to prove the resurrection and establish the gospel: Jesus’ death, burial, resurrection, and appearances (1 Corinthians 15:1-5). While there may be some theories to explain one or two of the above facts, only the resurrection explains and accounts for them all. Critics admit that the disciples claimed they saw the risen Jesus. Neither lies nor hallucinations can transform people the way the resurrection did. First, what would they have had to gain? Christianity was not popular and it certainly did not make them any money. Second, liars do not make good martyrs. There is no better explanation than the resurrection for the disciples’ willingness to die horrible deaths for their faith. Yes, many people die for lies that they think are true, but people do not die for what they know is untrue.

“Every man dies, not every man really lives” – William Wallace

For to me, living means living for Christ, and dying is even better. Phil 1:21

Jesus offers life, His life (an exchange for a dead husk)