The Victory in Perception

Let us look at the life of David, and specifically, lets look at 1 Sam 17.

1 Sam 17:1-11 outlines the scene of a battle drawing between the army of Israel (led by Saul) and the army of the Philistines. In fact, it looks more like a concession of an entire army in fear of one man, Goliath. Here is a man of men, standing over 9 feet tall, and standing as the champion of the Philistines … calling out to any man among the Israelites who would be their champion and fight him; one on one, winner take all. Not one man would step forward and preferred to hide among the trees at the edge of the field.

Forty days have shown this repeated pattern with no one to take the Philistine’s challenge according to verse 16 (1 Sam 17:16)

Who comes along ? An insignificant shepherd boy, youngest of all his brothers, on a errand to bring the “big strapping fighing men” some food. He was sent by his father, Jesse, to bring his three older brother some roasted grain and bread, and some cheese to their commander, and to come back with news. 1 Sam 17:17-19.

1 Sam 17:24-29 outlines the description of the reward awaiting the one who could bring Goliath down and also describes the three brother’s anger toward their brother David, since his questions are obviously embarrassing them.

1 Sam 17:31 shows the words of David repeated to King Saul, who is in complete disbelief of this boy taking on a warrior such as Goliath. Let’s look at David’s response in 1 Sam 17:34-37 …

1 Sam 17:38-39 reveals a typical wordly response to trials, fighting with wordly weapons rather than using the very things we have seen God use in past trials. Why is it that when the heat gets turned up a little we forget how God does things and revert back to old school solutions that have nothing to do with God’s work ?!  David takes off Saul’s armor, goes back and gets his shepherd crook, goes to stream and chooses a handful of smooth stones appropriate for his sling. He chose to lean on what God had been surrounding him with when he passed through the earlier trials, things he was accustomed to winning with in the past in God’s will. Important lesson here … God brings us through situations so that we can learn to trust Him more and lean on Him (and for Him to empower the tools He gives us to see the victory awaiting) 2 Cor 10:3-5 and the armor of the Lord Eph 6:10-18.  We are brought through these trials and tests to learn how to lean on all of these divine tools and weapons. Does it make sense that we should drop these at our feet and pick up the old stuff, that does not work, when something new comes at us ?

Of course not !  But we let our sin nature dictate what we will place our trust in to resolve things, to protect ourselves. The interesting thing is that we usually justify it with comments like “this is different!”  Is it really ?  David said this 9.5 foot Philistines was no different than a lion trying to steal a sheep !  I am willing to bet that he fought off wolves before he took on a lion as well. (since God has a way of training us up from easy to harder to still harder to very hard, etc)

Practice your spiritual warfare in the smallest of choices and let God bring you to new battlefronts of fresh battle smoke. You can’t follow a path of victories when you pass up on the simple ones right in front of you (and expect Go to drop the big dramatic ones in your lap when you refuse the easy ones)  By the way, refusing to claim victory in the easy ones only reveals that you are not ready for anything else anyways.

How I define success is just as important as how I achieve succcess because we are created by a loving God who is even more concerned with how our hearts grow that the materiala things we accomplish in the process.
Obstacles create new strength. James 1:2-3 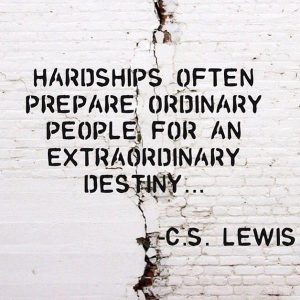 This is really easy to apply to the christian experience. Only in trials does our faith become tested and made stronger. James 1:2-4. God allows, even brings struggles into our lives because He desires, as the most loving thing anyone could desire for another, is complete Christ-likeness (and total dependence upon Him in faith) 1 Cor 10:13, Phil 4:13

It is the struggle that causes us to grow. Rom 5:3. Without resistance, there is no triumph of the heart and no growth of faith. The struggles we face are not punishments from God, nor are they something to be avoided at all costs. The struggles are often the greatest blessings since, as a matter of human track record, we do not learn from our apparent success, but rather from our failures. We are stronger after the trial, not after the smooth sailing. It is the gym workout that tones us and increases our endurance, not the month long vacation, swinging in a hammock and watching thousands of clouds drift overhead. We get soft without adversity. We grow weak without resistance.