Last week, I wrote about the Belt of Truth and the Breastplate of Righteousness (pt 1)

Let’s imagine for a moment that you are standing on a floor covered with slippery oil, (note that I did say “standing”) and your task is to push some backward or sideways by grappling with them and using your leverage or weight to move the other person.  Did you picture it ? Did you also picture the other person laughing as you slid in the opposite direction that you intended to move this other person ? (because that is the only thing your going to accomplish… just you sliding around with no traction) 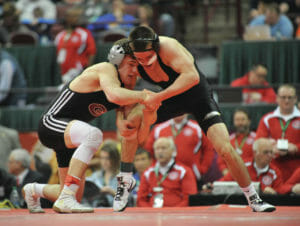 Traction is the key word here. Eph 6:12 ( the introducing passage to the entire armor section) says “we struggle against…”  The Greek word is πάλη (Palai from the root Pallos which means to wrestle or sway back and forth against). Without some way for your feet to grab the surface underneath you, you can offer little to no resistance to an outside force or expect to create sufficient force or leverage to move anything or anyone.

Here are two pics of roman hobnailed boots such as Paul is describing: 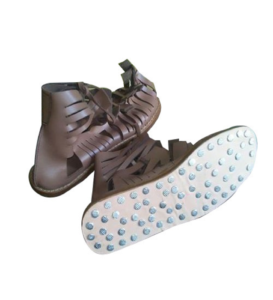 These metallic bumps on the bottom of the soles increases traction in loose or dry soil and gave the wearer extra leverage to hold his ground while either resisting force or to create more force of his own to push another back.

“The Gospel [of peace] is so called, because it makes men to be of peaceable tempers and behaviour, and gives peace to distressed minds: it directs the way to eternal peace, and publishes peace made by the blood of Christ; and has a much better claim to this name, and epithet, than the law has, which is often called “peace” by the Jews F12: the “preparation” of it does not design a promptitude or readiness to preach the Gospel, or to receive it, or profess it, or to give a reason of faith in it, or to endure reproach and persecution for it; nor that readiness which the Gospel is a means of, as for every good work, for the spiritual warfare, for the Christian’s journey heavenward, or for heaven itself: but the word (etoimasia) signifies a “base”, or foundation; and so it is used by the Septuagint interpreters on ( Zechariah 5:11 ) ; and here it designs a firm and solid knowledge of the Gospel, as it publishes peace by Jesus Christ, which yields a sure foundation for the Christian soldier to set his foot upon, and stand fast on; it being that to him, as the shoe is to the foot, its base or foundation: and for the feet to be “shod with” it, does not mean the outward conversation being agreeably to the Gospel, though such a walk and conversation is very beautiful and safe, and such may walk and war with intrepidity: but it designs the constant and firm standing of believers in the faith of the Gospel, and so striving and contending for it, without being moved from it, that it may continue with them. Shoes or boots, which were sometimes of iron, and sometimes of brass, are reckoned among the armor of soldiers”

(in summary, Paul is describing a firm foundation (or footing) in the Gospel, from which the believer may avoid slipping or being pushed around by false docrine (or false truths)

What then does this mean ?

1 Peter 3:15 tells us to always have an answer ready for the faith that is within us.

(how can we have an answer if we know not what we believe ?)

Today’s believers, though not all, have become complacent and quite content to attend church on Sunday and forget everything but a warm fuzzy by the time they get back home. 🙁  Our feet slip on dry ground, let alone the ever increasing slippery slope of today’s culture.

When someone approaches me, in my faith, and accuses me saying”if God is a god of love, then why does he send people to hell?” I need to know what and wny I believe what the bible says about the depravity of man, the inability of man to pay for his own sins, the propitiatory sacrifice of Jesus Christ on the cross and my inherited standing in the righteousness of Christ … otherwise, maybe I should just tell the non-believer that I am “entrusting my eternal destiny in something that I do not understand or took the time to understand ?”  yeah, right !!  NOT !!  LOL

Would you sit in a chair without having some knowledge that it would hold you up?  Do you walk out on thin ice without first determining that it will not break and let you fall through ? (of course not, in some form or fashion you have information, data, research, observation, whatever, that proves it is safe)

If Jesus stood before you and asked why you trust Him with your eternal life, what would you say ? “my pastor said to” ?  my wife trusts you and that’s good enough for me” ?  how about, “my life was a mess and I needed you to fill the empty space in my heart” ? (get a puppy ! LOL)

Christianity is the only “religion” which admits

Roman’s Road is a common sequence of verses to lay down the Gospel:

This firm foundation is the “preparation of the Gospel of peace”. with it:

God has provided his Word for us to dive into, read and understand.

are you wearing the right footwear ? (It’s never too late to strap on some Gospel and be ready to contend for the faith in whatever “ring/arena” God has placed you in. Recognize that God has placed you there by divine providence and get some traction in His name 🙂

next week, shield of faith … 🙂